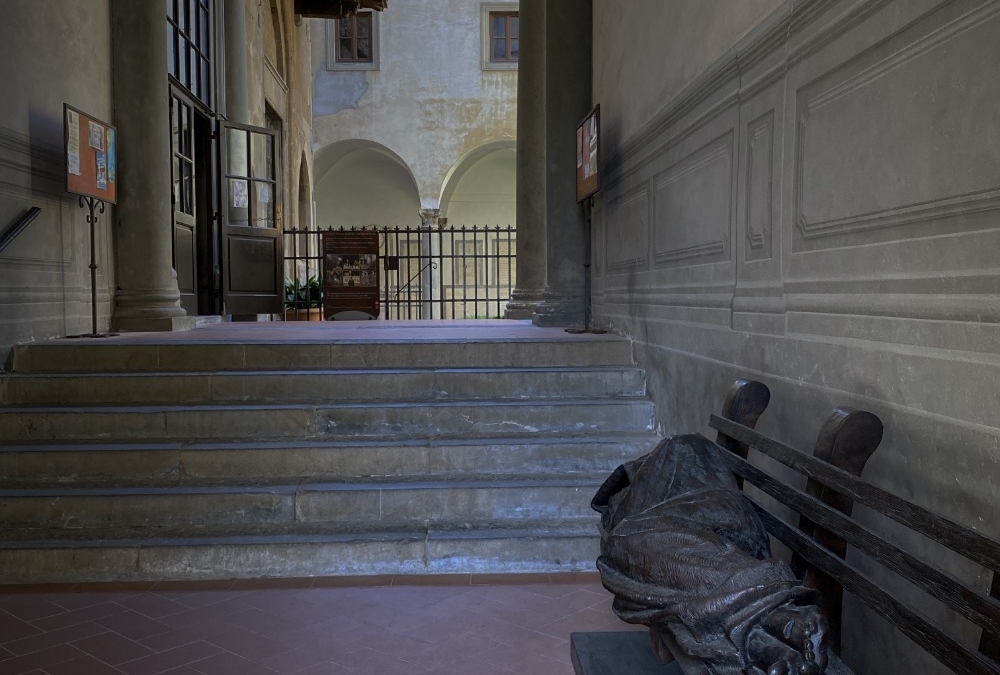 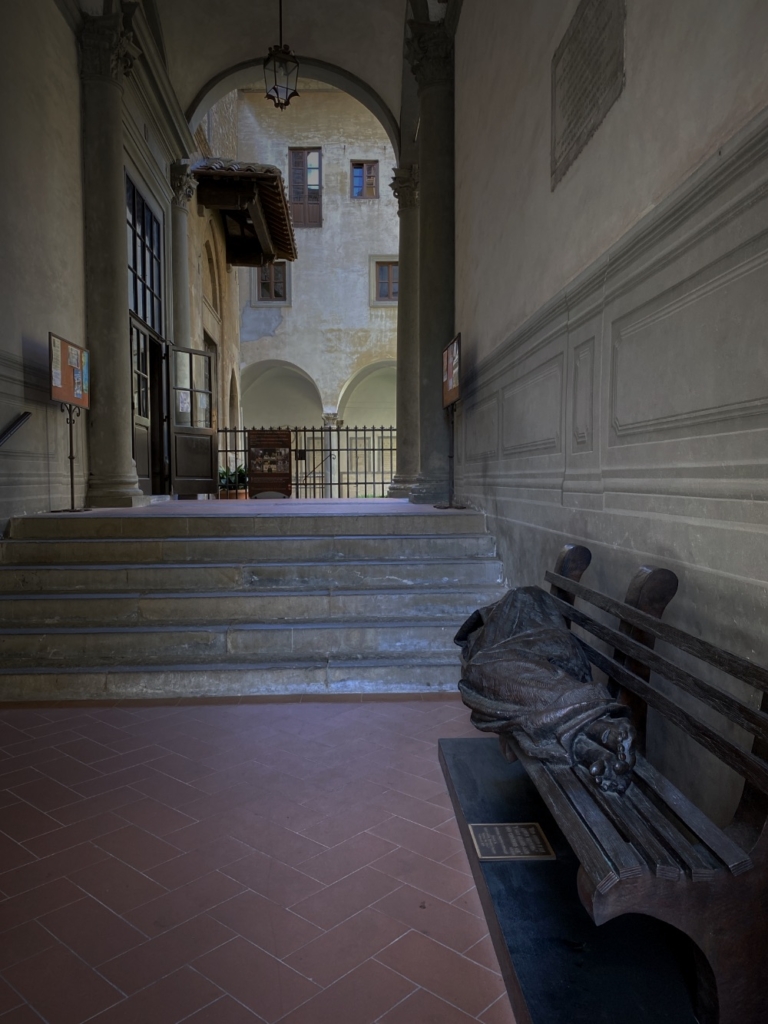 Have you ever had a “change of direction moment”? I’ll describe one for you. You think your life is clipping along perfectly, that you are doing everything right, that you are in control. It’s a feeling of, “Hey, I got this!” and then things shift. For some it is a major life event, for some it is witnessing or living through tragedy, for others it’s a family event.

For me it was walking into the Badia Fiorentina.

During the recent global situation, I took to walking in the morning, at first light, watching a day come alive while stepping through the streets of my city, Florence. My morning walks would take me through the ancient city and almost daily across the Ponte Vecchio, often in complete silence and through lonely streets, seemingly resting after years of millions upon millions of visitors trampling upon her hand cut stones. Yes, every chip you see in a stone on a Florentine street is still cut with a hammer and chisel to give it a look and also to make it a little less slippery.

I often pause on the Ponte to gaze onto the Arno river and to feel the direction of the wind, to see or notice what pattern the wind draws across the surface of the water, Occasionally a very early riser at the rowing club beneath the famous Uffizi gallery would be opening up the doors to prepare for a morning scull.

I choose different routes every day and try to be home by around seven when the rest of the world is waking up.

Let me get to that moment I was speaking about earlier.

I was on the way back home and took a back route past the Galileo museum, down via dei Leoni (the way of the lions, so named because this is where one could see where the wealthy once stored their prized lions in cages). Then I continued behind the Piazza Signoria to Piazza San Firenze which houses the old courthouse and jail. This route is about 150 meters, but it goes to show you how Florence is a city built on a human scale, with building after building housing some interesting story.

As I passed the Bargello Museum (the building that was the jailhouse in other times) across the street I noticed a large set of double doors, open and inviting and something called my attention to them. It’s a few steps up toward the church and I immediately found an incredible modern bronze sculpture depicting a man in a cloak, sleeping on a bench with an inscription reading, “I was naked and you clothed me.”, mt 25:36

The feet of the statue are exposed and, getting closer, I found they displayed the stigmata, the wounds, the marks where the nails had been through Christ’s feet. 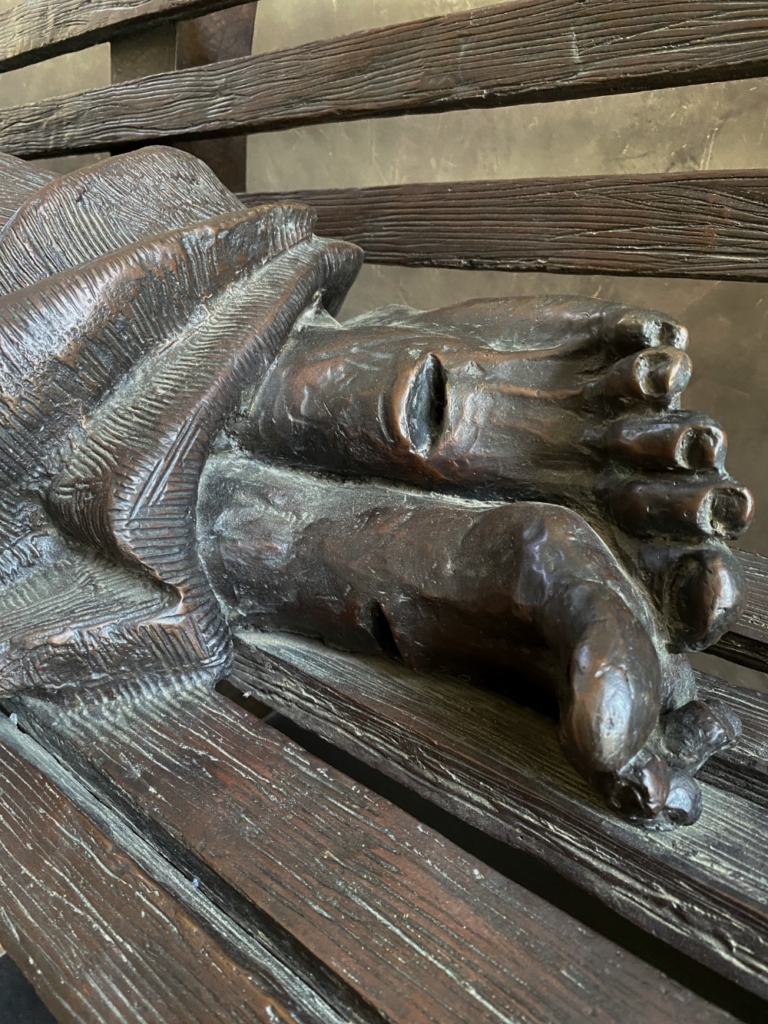 I had not noticed at first but It was Jesus.

I don’t mean Jesus in the way, I may have realized, “oh this statue represents Jesus”, I mean it in a way that in that moment, Jesus revealed himself to me and I can only say this looking back on it.

In that moment, I was touched by this image of poverty and the striking idea of being able to see Jesus in everyone and everything. Then I heard it, the sound of singing and as I walked through toward another set of doors and entered the church. I had been here before, years ago, but now it was different. The sound of morning Lauds was filling my heart and my eyes with tears at the same time. In some way I felt like I was home. The feeling was one of complete love.

In the months leading up to this moment, I had been receiving a very strong message with a strong emphasis on this repeating phrase,

This message brought me to this place and somehow, from here on things would be different. I sat in awe and listened to songs of David, and watched as both men and women, clothed in white robes, issued their morning thanks for a new day, for the graces given in their sleep, praying in thanks for all that is God’s great gift to us each day.

“Thank God”, I thought, “that there are people who pray, who have prayed like this for centuries, to keep the teaching of Jesus alive”. I really felt like these people were, in that moment, for me, the keepers of the faith. How had I missed this? Why had I not experienced this before? A half hour in this stillness had restored my soul and with each morning over the next few weeks I would answer the call upon waking and head over to the Badia Fiorentina and the Monastics of Jerusalem to pray with them, but mostly to be in their “presence of prayer”.

This was something no other thing had ever given me, and even being a lifelong Catholic and a “practicing” one, I had never felt called by Christ in this way, inviting me to get to know the Holy Spirit in a more intimate and precious way.

In the weeks that followed I got to know Padre Giacomo and the prior Pierre Antoine Emanuel, who generously and delicately extended a lunch invitation. Each step of this journey is the opening of a hardened heart. My heart, which I so believed was open and accepting and loving, was actually closing over the years and I had become trapped in a cycle of risk and reward, entering into faith with a hint of expectation and a ‘desire to be seen”, rather than live a truly authentic experience.

In the months that followed, the Badia and the people there with Christ and the Holy Spirit at the helm, revealed the miracles of faith that have brought me to this page, writing to let you know that the only way is love.

Love is always the only answer.

I am so grateful to these “caretakers of faith”, who throughout history have had the courage to choose to live and pray in a way that preserves something sacred.

This is the beginning of my new journey in life and in Christ.

The story just gets more interesting.