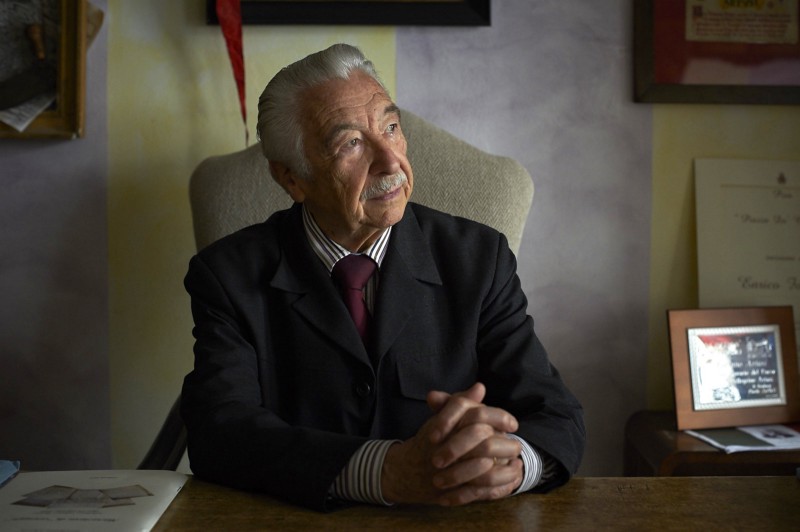 Luciano Artusi was born in Florence. Now retired, from a diverse career as publicist and journalist, he is a Knight of the Florentine Republic and the former chancellor of the Conciliator Judiciary. A career lecturer and scholar he has popularized Florentine culture and Tuscan history through his many writings including, articles in magazines and periodicals. Luciano is the author or co-author of over ninety publications.

An avid sportsman and amateur footballer, cyclist and parachuter, Luciano poured his passion for history and sport into his role as leading authority and Director of the Calcio Storico Fiorentino (historical football) from 1960 to 2015, and represented the ancient sport worldwide: in 1959 Turin, at the 1960 Olympics in Rome, at the 1976 Columbus Day in New York, the 1982, 1986, 1990 World Cup Championship in Barcelona, Mexico City, Italy in the in Florence respectively.

Scroll to the end of the article to see the film!

This text is written by Luciano Artusi and Translated by Rima Stubbs.

HOLY EASTER 2020 — Explosion of the Cart

This short video is for you with sincere Easter wishes and so that each of us can find the true meaning of what this Holiday truly represents: peace, serenity, harmony, brotherhood and love. Since we are all confined to our respective homes, we wanted to bring the traditional “Scoppio del Carro” to your home, given that this year the celebrations will not physically take place. So here is our “Easter egg” to you, with the surprise of a grandfather telling you the story:

The tradition, as you all know, is lost in the realms of time as it dates back to the 1st Crusade, called for by Pope Urban II to remove the Holy Sepulcher from Islamic possession. The tradition/legend, which has now become part of history, tells us that 2500 Florentines had joined the military expedition of the Christians under the command of Pazzino dei Pazzi. On the 15th July 1099, after more than a month under siege, Jerusalem was conquered and the first to climb the walls of the Holy City, was Pazzino de ’Pazzi who raised the white and vermilion (Florentine) flag. For this act of valour, Goffredo di Buglione, absolute commander of the crusade, granted Pazzino the privilege of adopting his coat of arms — two golden dolphins placed on a pole on a blue field — as well as giving him 3 stone flints of the Holy Sepulcher. On 16 July 1101, Pazzino returned to Florence to receive his solemn honors. The three stones, held in great veneration, were kept in the Palazzo Pazzi in Via del Proconsolo and then delivered to the Church of Santa Maria Sopra Porta, located in the Mercato Nuovo at the city gate that guaranteed passage through the city walls. Santa Maria Sopra Porta was one of the oldest churches in the city, where the Martinella was also housed; the small bell called Bellifera, because it rang only in wartime and which is now placed on the carroccio or cart. When this church was suppressed, the sacred relics were transferred, first to the adjacent church of San Biagio and then to that of the Holy Apostles, where they are to be found to this day. The three stones, a few centimeters in size like almonds, form the origins of the traditional ritual of the Scoppio del Carro.

Today, with the recent liturgy of 2012 in place, the celebration begins on the evening of Holy Saturday when, at 8.30 pm, from the Church of the Holy Apostles, the stones and the reliquary are carried in procession to the Cathedral of Santa Maria del Fiore. Here on the Cathedral steps, the archbishop Giuseppe Betori, at the ring of the town bells, lights the fire in a large reliquary and blesses it. Then, to the blessed and pure flame — a symbol that evokes the Resurrection of the Lord over the darkness of death — he lights the Easter candle. The celebration ends with the placing in the Cathedral of the reliquary with fragments of embers and the lit candle, which will ignite the cart the following day.

At 8.00 am the cart of the Holy Fire, or affectionately named by the Florentines as “Il Brindellone” for its size;11.60 meters tall, departs from its premises where it has lived since 1864, to be hooked up to two pairs of mighty, white oxen with horns and hooves painted gold and their heads adorned with flowers and lilies. Escorted by armed men, musicians and flag-wavers of the Calcio Storico (Historical football) at 8.30am the cart, four centuries old, moves elegantly through the city center.

The colorful procession accompanied by the marching pace of the the armed forces, reaches Piazza del Duomo where it is positioned on the Cathedral steps, while the cart stops in the space called “Paradiso”, between the Baptistry and the Cathedral.

The oxen are detached and led to a quiet area of nearby Piazza della Signoria. At this point, the long steel cable, stretched 7 meters above the ground, is fixed between the cart and the wooden column specially mounted on Good Friday below the high altar, along which the Colombina or dove will slide to spark off the fire of the 1600 fireworks arranged around the three tiers of the cart. Trumpets, drum rolls and flags juggled by the Bandierai of the Uffizi are the splendid backdrop to this ancient tradition. The procession greets the Archbishop when he leaves the Baptistry to bless the cart and the citizens and then heads inside the Cathedral to officiate the Holy Mass. Shortly before the ritual display, which takes place at 11am at the singing of the Gloria, a draw is made to determine the pairings of the teams that will play the San Giovanni historical football tournament in June. The first two colors drawn will meet on the first day, the other two in the semifinal, then the winners will meet in the final to win the prize on June 24, the feast of Florence’s Patron Saint.

Waiting for the firework display, the crowd looks impatiently at the hands of the clock that move towards 11 o’clock. At that hour the Archbishop intones the hymn of Gloria and with the Easter candle he sets fire to the fuse that shoots the Colombina up and along the metal cable for the 120 meters through the central nave until it hits the cart and causes the explosion of rockets, pinwheels and fireworks — once called Fochi d’allegria; the fireworks of joy — which last for about ten minutes, amid thunderous bangs and mini-explosions and the festive ringing of church bells. The explosions of smoke and sparks of all colours, symbolically represents the distribution of the blessed fire to all present and to the whole city. The outbreaks reach their apex as they rise towards the top of the cart where finally, the pinwheel will hiss and open like the petals of an iris and three small banners will appear with the symbols of Florence , of the Opera del Duomo and of the Pazzi family. Meanwhile, the Holy Mass continues in the Cathedral.

Once the Eucharistic celebration is over, the three stone flints of the Holy Sepulcher and the reliquary are returned to the Church of the Holy Apostles under escort of the Municipality’s families with the banner of Florence, where they will remain until the following Easter.

Piazza del Duomo slowly empties, the procession of Calcio Storico returns to its offices and the pigeons return to fly in the sky, undisturbed.

Now everyone returns to their homes to eat the blessed easter eggs, symbol of fertility and rebirth in the Christian world, meaning spiritual resurrection or the good intention of improving.

With this, dear friends, we wanted to offer you our best wishes for a good and happy Easter. With the hope that the Lord will protect us and that next year we can finally see and embrace each other again in Piazza del Duomo!

In this dynamic video Filmmaker David Battistella collaborates with Florentine legend Luciano Artusi to bring you a glimpse of the Florentine Easter Tradition, cancelled in 2020 for the first time in hundreds of years.

This writer and filmmaker combined to create the film, while in complete lockdown and isolation in Italy. They created the film as a contribution to lifting people’s spirits and to demonstrate their mutual love of Florence.

The two met when Battistella moved to Florence to research his hero Fillipo Brunelleschi and write a film about his life. They became fast friends and have a passionate curiosity for all things Florentine!

Battistella continues to make films about fascinating people, stories and places in his new home in Florence, Italy and the pair are already planning their next collaboration. 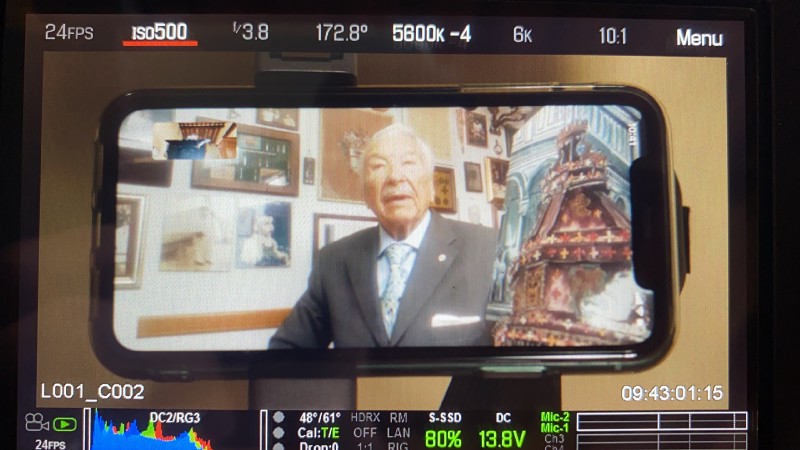 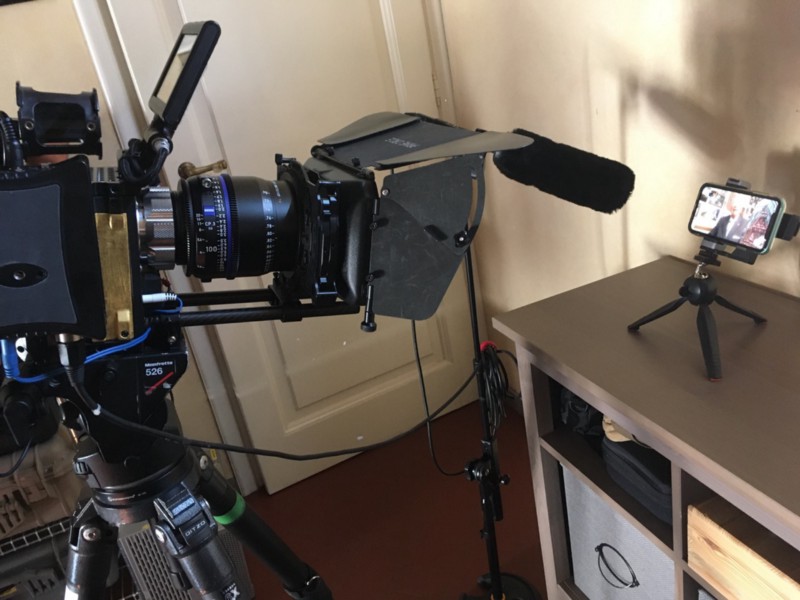