As we come out of our homes after months and un-precedented global halting of people’s lives, their movement, a limiting of physical freedom and a barrage of media terrorism (a term I borrow from my friend Don Alessandro who has now left us), I find myself turning to a latin phrase that once captured my imagination. The phrase is ’Momento Mori’. Don Alessandro didn’t love that I had it put on a T-shirt, but he knew I was being an ever curious student of life.

Loosely translated this genius and poetic Latin phrase means, “Remember Death” or “remember that you will die”. Fact hurts people’s feelings sometimes. Data confirms that death will one day be at your door, at the door of a loved one, at the door of everyone on this planet.

How unique are you? Very.

Take a moment to stare at your fingerprint on your index finger. Pause. Seriously take a moment to do it. That finger that clicks touch screens a million times a day. That fingerprint is so unique that only you — only you in this lifetime, will ever have that fingerprint. That identifier, this perfect, unique expression of you has never been and never will be given to another human being — ever. That is your uniqueness. The uniqueness of your own body. You are the total expression of your entire life.

Many biblical phrases have come to my consciousness during this time of reflection and expansion. Matthew Chapter 10 verses 30 and 31 have been ones to think about for certain;

“Why, every hair on your head has been counted. So there is no need to be afraid; you are worth more than many sparrows.”

Also it is relevant to note that the words “be not afraid” or “fear not” are mentioned in the Gospels some 365 times. Hint: the “news” is not the true meaning of your life.

Still, it’s been a wonderful time to soak in the true meaning of things. It’s been a time to indulge in the wisdom of the ages. To contemplate how we might — how I might bring my life forward out of the cave that is my home in the shadow of Brunelleschi’s Cupola.

During the plagues in Florence there was no suspension of religious services. “How dumb, they must not have known any better”, might be a common response here, but come with me as we think a little deeper. People of that time were able, very qualified intellectually and physically. Mentally prepared and well educated. They were able to design, execute and construct the world’s largest masonry dome, without the assistance of gasoline or electricity.

Michelangelo lived to 89 years of age, Leonardo Da Vinci and Brunelleschi respectively to the ripe old age of 69. They knew a thing or two about botanical medicine, the effect of excellent nourishment on the human body. The city was equipped with ambulatory services and hospitals (the mercy confraternity in operation some 8 centuries and the oldest hospital in Europe Santa Maria Nuova) and were providing care to a city who’s population had grown larger than to that of Rome at the time; a bustling metropolis of 120,000 people by the early 1400’s which had grown from 50,000 after the true plague pandemic in 1300’s where 60% of people DIED.

Yet, was it that they were “dumb” or had they understood something; that latin phrase, “Memento Mori” as a part of their own lives and very existence. Also, perhaps even the acceptance of the beautiful and fragile nature of life. Maybe they had an understanding that man is not an omnipotent force “in” nature, but simply another part “of” nature — gifted the miracle of the human hand, the one thing that sets us apart from everything else.

The same human hands that built their churches and flipped the pages of wisdom that had been written by the hands of scribes who put ink to paper. Ink which from walnuts had been extracted to be dipped into by a finely-tuned feather that would be used to write and transcribe this important knowledge to be passed down through generations.

As I come out of these days of reflection, I realize that I too have remembered my own death. In so doing I have understood the true value of my own life, but also very importantly accepted the fact that death exists and it will happen to myself and everyone reading these words. Somehow this has given me a new capacity to love and to be able to say “I love you” in a genuine way and that is to say I love and respect your humanness.

This time has also confirmed for me that I simply refuse to be terrorized by death or by an unknown death. I’m pleased to have picked apart the Media Terrorism — as the universal “they” have attempted to shout in our faces for months now.

Over his time, someone told me I would die or that I might die, that thing would would kill me, that it would kill many, that I am at risk, that I put others at risk, that I need a mask, that I do not need a mask and that I now need a mask, that I must maintain a distance of one meter, that I must maintain a distance of one point eight meters, that this started here there and everywhere, that no one knows where it started, that there are conspiracy theorists, that there is no cure. Now, they tell me I will kill someone else if I do not wear a mask around.

I like data. Numbers are interesting but like everything else can be manipulated or reinterpreted. The source for my numbers is world-o meters and they will all have changed by the time you click and look for yourself. (which I encourage you to do, it’s sobering)

Births this year — More than 44 MILLION

Deaths this year More than 18 million

The sort of illustrates how the media can create fear around the number 203,612 or the word pandemic, lacing together just the right cocktail of fear and information, hype and hyperactivity.

Here, another pertinent biblical phrase which rings true. Thank you Mathew in chapter 24 verse 36 for reminding us of our humanness.

“But as for that day and hour, nobody knows it, neither the angels of heaven, nor the Son, no one but the Father alone.”

As I come out of this time I am left with a new awareness of how we are terrorized by media and somehow taught that we are small and weak and that our death is something to be feared. Of course, once you fear death, you can fear anything and that fear is cultivated in you.

I hope that in this process you have not learned fear, I hope you have “learned” that an unknown virus might kill you — or your father, mother, brother, sister or child. No one wants to have to experience them but many of us will. Many of us have.

While this moment has been happening some have been made to feel helpless, but there is something we can do about it.Switch off — not to the point of not receiving information, but being in command of the flow of information

We can comfort, we can prolong, we can reverse, we can cure, we can do so much. So much empathy, compassion, love….and we will also grieve. We will grieve the names, not the numbers, we will remember people, not the statistics, we will be wary of media and not so quickly equate it to truth and instead seek out truth between neighbors. 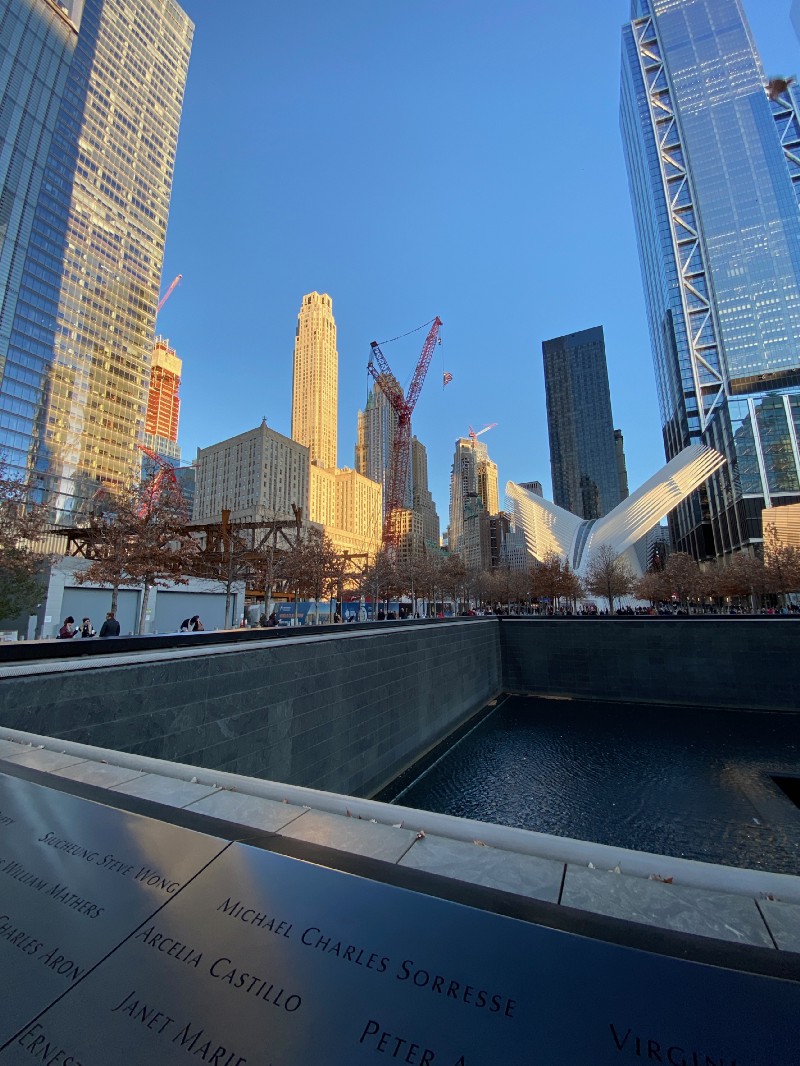 When I was last in NYC, I walked the 911 memorial and I looked at the names; the names of people who had fallen on that day, the people who’s lives had been taken. I remembered and reflected on how much our world changed after that moment, that going through an airport would never be the same and that the sacrifice was worth it to “protect us” from people with boxcutters who get on planes to commit acts of terrorism.

This world situation feels different. I have not heard or seen but a few names, there is no “place” where this flu happened, it is everywhere and nowhere. It was given a name and 3 billion people stopped in their tracks — they found the fear that would shake us all to our core and they and rammed it at us, shut in our homes for months. They put every possible scenario into the whole situation creating a tangle so that there will never be a clear answer.

Now, citizens are pitted against one and other, and the words “Why aren’t you wearing a mask?” is a phrase that has already led to violence in Italy.

Memento Mori. We no longer are raised to remember death but perhaps remembering death and remembering our own TRUE humanity, our own TRUE uniqueness, might be the only way to emerge from this process with love and respect for one another on this planet.

Death is not to be feared because it is as natural as birth. “Life” as Eckheart Tolle put it so eloquently, “has no opposite”. These are the sentiments to be embracing as we emerge from our homes and return to “normal”. A normal for me is what one feels, never what someone tells you to feel. Normal, has in some way been taken from us — systematically and over time — in a way that we will never understand how it has been stolen.

Let us all tell those screaming voices of fear, panic and mayhem in all forms of media to please take step back and allow us continue to live our one, true, unique life in peace and loving fellowship until that important “one day” comes for us.

This time has given me an understanding that my death, my personal and intimate exit from this planet is my own and will come at an unknown time, until then I’ll be smart and safe and loving and “physically” distancing but not “socially” distancing myself from the world and loving people all around me.